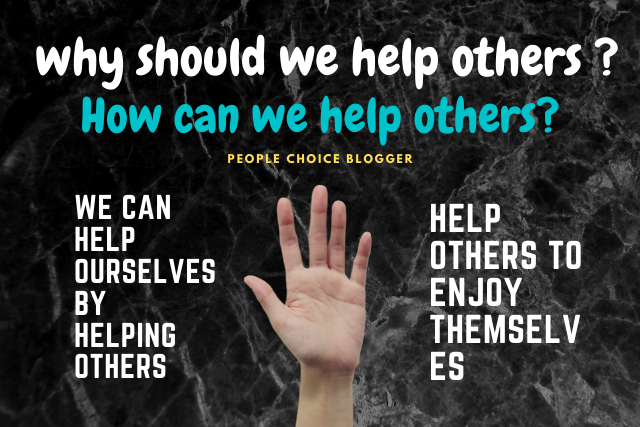 Today I will explain to you some of the things I know in my life about why should we help others ? From the beginning of the world, people have been dependent on people for their livelihood. In ancient times, when people lived together, they all lived together. Because there was a time when death was destined for anyone living alone. It was impossible to be alone at that time.

There were a lot of wild animals at that time and since then people have been living on their own. People go from one person to another in need and meet their own needs from him.We all need everyone. We see in this society that if one does, one business, the other does another business, we all do different kinds of business.

Everyone has a sense of conscience, so if we judge with a conscience, our conscience will surely testify that people need help. It is a great thing to stand by others to help them. For the one who is sympathetic to the other, there is nothing very good in front of him. One thing you will notice is that when you help a person and he is happy to help you, you will feel much better.

You will never get hurt if you help people. If you lack or do not have pain or peace of mind, you will help people and you will feel better. All the happy people in the world are happy to help others and empathize with each other. So we all desperately need to be sympathetic to everyone.

And in the danger to others, we stand by his side. At the present time, we do not want to help people. But we must remember that people are all dependent on each other. If you help others, remember that something good will come to you and you will be happy.

One more thing to keep in mind if you want to be happy and good in life then you must help others. Many great sages have spoken of helping people in the most revered book. Below are some valuable tips on helping people :

There are countless valuable sayings of wise men for their own success in helping people. Indeed, helping people for their own benefit, which is why scholars have said invaluable things about it. So let us know the results of the benefit through some true facts. And create interest in ourselves to help others.

He got his eyes back by helping people !! True facts

Once upon a time there was a poor family in New York City. There was no one in their family except husband and wife. They had no children. However, somehow their livelihood was going away. But their economic situation was so bad that they could not eat properly. So one day the man’s wife told her husband to look for another job. Our family is not doing well with the money we earn from this work. Because of his wife’s words, the man thought his wife was right. Their economic situation is very bad and they cannot meet their needs well. So finally the man went out to find a job.

But his luck was very bad. As he was crossing the road, he was suddenly hit by a car. This caused him severe pain in his head and he became blind forever. Then his wife became very worried about how to run their family. A few days later when all the food in the house was gone. Then finding no other way, the man’s wife went out to find work herself. His wife got a job in a restaurant. The man’s wife works to support the family and also treats her husband. The doctor said that if he could pay Rs 10 lakh, his eyes could be fixed again.

But because their economic situation was so bad, it was impossible. Meanwhile, the person is very worried about what he will do. He can’t do any more work because he is blind. That person had a very old habit of drawing. But because of poor economic conditions, he had to give up. But he thought he would start painting again. But he could not see with his eyes. ‌‌So he thought maybe it wouldn’t be with him either.

After thinking about all this, she thought that it might be better if I started drawing anyway. So he got rid of the thoughts and started drawing very carefully with the joy of his mind. At one point it was seen that his pictures were looking very beautiful. His wife was fascinated by the scene of his painting. And his wife was amazed at how beautiful the scene could be. At that time there was talk of a competition in their city.

The main theme of the program was painting. The one whose picture is the most beautiful will be given a prize of Rs 10 lakh. Then his wife did not want to miss this opportunity. Then the man’s wife put her husband’s name in the competition. But that person could not accept it. Because he thought maybe his picture would never win the prize. He thought maybe his wife was hoping to win the competition. Thinking about this, he told his wife that this would not happen to me.

And he qualified for the first prize. But when he went to get the prize, everyone realized he was blind. So no one could believe that a blind person could draw a very beautiful scene. The scene painted by the two was the most beautiful that day. So the other side said this blind man must not have made this scene himself. Someone else made it. After hearing this, the blind man said that if I am not considered worthy of it because of my disability, then I cannot accept it. When the other party heard this, he challenged. If the blind man can make another scene in front of everyone, he will be considered worthy of the first prize.

So he gave the award to the challenger. At that time, the person who made the picture of the other side did not understand why he was being given it! She doesn’t deserve it! But why is he giving it to her. Then the blind man said, “I need to heal your sick father more than I do.” So you take it and treat your sick father. Then the person on the other side was very happy with his use. And he sold it without delay and went to the hospital for his father’s treatment with Rs 10 lakh. But unfortunately, by then his father had died. The man was devastated to see his dead father. The man then told the doctor that he wanted to donate his father’s two eyes to a blind man. Then the blind man who gave him the prize gave him his father’s two eyes. And the blind man got his eyes and started seeing this beautiful world again. From this story we understand that if we help people, then we will definitely benefit ourselves. So we will always try to help others.

There are thousands of such cases. He has had great success in his life because of helping others. So from these incidents we can understand very well that helping others is for one’s own benefit. So we will always try to help others. We can help people in many ways. We will stand by his side and help him in the danger of others. Surely other people will stwhyand by us in our danger. Help others if you want to find peace of mind. So let’s know a little bit about how we can help plants.

How can we help others?

Innumerable animals live in our world. Every animal is dependent on each other. Everyone needs help. We each need the help of others. You can become a human and help another animal. You can help another person. So let’s know a few ways to help others.